Here in Manhattan, the past weeks have seen massive demonstrations centered on the lack of retribution for the tragic killings of Mike Brown and Eric Garner. At MarketSmiths, we join the mourners—for the victims, the families, our broken system.

We also know how deeply rooted racial indignation is in our culture—and have seen how the quickly the dialogue can turn from neutral to outcry. And so we unveil this: our most somber installment of MarketSmiths’ Badvertising yet. As usual, DO NOT TRY THIS AT HOME.

Back in 2011, Nivea skincare ran a popular commercial campaign called “Look Like You Give A Damn.” The focus was to get guys to clean up their act: tame that ragged beard and unruly haircut. This filtered into two print ads that showed well-groomed, clean-cut men (one guy white, one guy black) both holding decapitated heads representing their old, scruffy selves, pre-Nivea. Slightly weird, but okay. 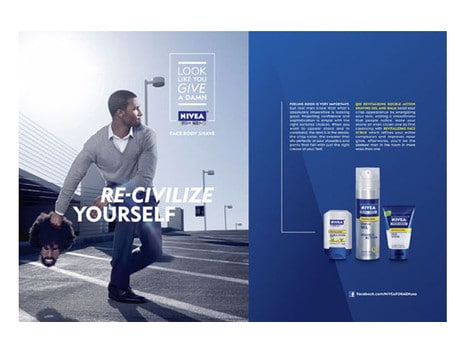 Both “before” heads look like cavemen, right? What’s the beef?

Racism, cried the public. Why does the black model’s decapitated head sport a Malcolm X beard, a scraggly ‘fro, a pissed-off expression and the words “Re-civilize Yourself”? Why is it that the ad featuring the white guy doesn’t mention anything about “being civilized,” instead suggesting a dapper dude emerging from an all-night rager…or Vegas.

Did the campaign suggest a civility gap? Many thought so, and loud and clear.

The camera angles didn’t help. The black model posed as classical athlete, like Discobolus, set to throw a discus—er, human head—at the ancient Olympics. The white guy resembles a lit, lauded statue, like Michelangelo’s David contemplating his upcoming bout with Goliath (who, you may recall, was beaten and decapitated by David). Did Nivea knowingly take the risk of playing into racial stereotypes? It didn’t matter to the protestors that Cliff Carson, branding lead for Nivea at PMK-BNC (a New York based agency), is black, too.

Anger rose. Twitter exploded. Public outrage over the ads was so fierce and immediate that Nivea quickly pulled both ads and apologized for their insensitivity.

The massive two-day NYC demonstration about Eric Garner is clear proof that there’s no excuse for skipping a cultural checkpoint. Of course, we copywriters can’t help but wonder what might have happened if the art director had simply swapped the ad copy. But we also know that as a society, we’re too sensitive to risk accidental offense to either side. Shame on you, Nivea, for not considering all sides.

A Round of Applause for the White House Grammar Editor

Help, I Have a Blister: 4 Tips for Better Medical Copywriting