In this year-end installment of MarketSmiths’ Badvertising, we take a moment to pay homage to Skittles and their wacky “Taste The Rainbow” campaign, one of the longest running campaigns in the history of advertising. As usual, DO NOT TRY THIS AT HOME!

Something strange happened to Skittles in 2004. Their “Taste The Rainbow” campaign, which had been running since 1994, was growing stale. Teenagers liked, but had grown bored with, their decade-long series of ads depicting wizards and other fairytale situations, and so the company was faced with a dilemma: an ad message that was too recognizable to discard outright, but too staid to continue as is. So they switched agencies and the campaign was reborn under the all-encompassing marketing message umbrella of “Experience The Rainbow.” 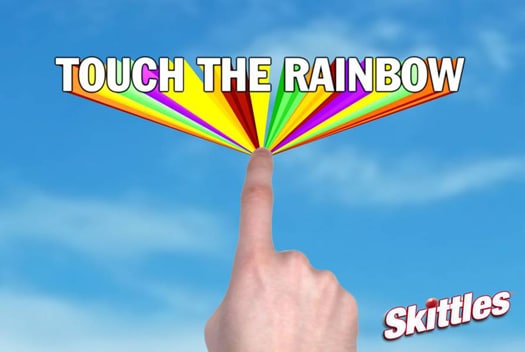 What followed (and continues to this day) were a series of ads that took the candy’s “rainbow” message to extreme and absurd heights: An opera-singing rabbit, a sleazy job searcher with a facial hair appendage, two guys held in a giant pair of hands and a sad man who makes everything he touches turn to Skittles. (“I met a man on the bus today. I shook his hand. He’ll never see his family again,” the man says as he dejectedly releases a handful of Skittles.)

From there the ads only got stranger (remember those bestiality ads featuring a particularly ugly walrus?) and more provocative (a human milking machine anybody?).

Love ’em or hate ’em, one has to admit that it is incredibly difficult to successfully market “weirdness,” so hats off to Skittles who has somehow managed to do so for over two decades—and with no sign of abating. Salute the Rainbow!

My Copywriting Christmas List: 5 Writing Mistakes I Asked Santa to Eradicate This Year

Can your “Boring” Company have Edgy Web Copy?

Why Your Company Needs a New Homepage (Today)