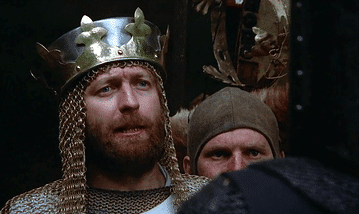 How does one actually go about being mentored? Do you take out an ad in the Sunday paper saying “Mentor Wanted”? Plant a sign in your front yard? Is there a school for mentors? A union? Can you earn a degree in mentoring? I wouldn’t know. I didn’t ask to be mentored any more than I asked to be born. It just happened.

Monty Python’s Graham Chapman Teaches Me How to Write Comedy

My mentor was the late Graham Chapman of Monty Python, and our mentor/mentee relationship began slowly–so slowly in fact that I don’t think that either one of us noticed it was happening until it was over. I first met Graham in the mid-1980s while I was doing research on a book I was writing about the Monty Python television shows (Monty Python Vs. The World), and he was on a lecture tour. As luck would have it I was the only writer in a room full of photographers so I pretty much had him to myself. He was impressed by my knowledge of “all things Pythonic” and invited me to come and stay with him when I went to London the next month. Graham was an extremely generous and warm man and a friendship was budding, and the mentoring had begun.

One morning, quite out of the blue, Graham asked if I would like to “try my hand at writing something with him. Was it a genuine offer? A joke? I told the cynic in my head to sit down and shut up. I quickly realized that it’s one thing to say ‘yes’ and quite another to actually put pen to paper and do it. What is the protocol? Do you initiate a sketch premise–or is that too presumptuous? Graham launched into a story about an exasperating experience he’d had with a bank teller. I don’t think I even caught the first few sentences as I was so preoccupied with the proper decorum, but when he said “How about that?” I snapped out of my cogitation as if I’d been zapped with 10 million volts of electricity.

“Yeah, that’s funny,” I recall mumbling, hoping he’d repeat what he’d just said because I’d missed it. Luckily he said, “Well, obviously it’s a man in a bank having some sort of difficulty with a teller.” That was glimpse enough to get my mind active. It’s been my experience that in any writing team there’s usually “the writer” and “the walker.” One of the team pontificates and the other is the guy who actually picks up the pen and pad and gets it all on paper.

Graham thrust a pen and pad into my hand, and began to pace. I began to scribble. “The man wants to make a withdrawal,” he said, “but the teller doesn’t speak English… .No, that’s boring.” Was he going to look to me for help? (God, please don’t look to me…) He began to walk again. He twiddled with his sideburns. And then he stopped walking and smiled. “He’s robbing the bank, but the teller refuses to co-operate. She doesn’t believe him. She…” he trailed off. He was stuck. Now is my chance to save the day, I began to panic. And then, miracle of miracles, I had an idea.

“What about…” I began hesitantly, “the teller’s a real stickler for the rules of the bank?”

“A stickler for the rules of the bank,” he deadpanned. I was sweating now.

“Yeah. Maybe he hands her a holdup note and she asks if he… has an account with the bank.”

“Do you have any collateral?” For a moment I was unsure if he was asking me that or if it was a line. My God, I thought, we’re actually writing a sketch together. And so it went for some twenty minutes. Maybe half an hour. Graham walked and talked, I sat and scrawled. I was writing so fast and furious that the letters on the paper were losing all shape, it was beginning to look like a relief map of Peru. And then, just as suddenly as the brainstorm began, it was over. Done. I dotted the last “i” and crossed the last “t” and then pushed back onto the sofa, utterly exhausted and deliriously happy. Granted, I had a cramp in my wrist unseen outside the confines of a SoHo peep show, but never mind… I looked up, stunned to see that Graham was watching Steffi Graf play at Wimbledon on TV.  I was a little pissed off. I mean, we’d just written a very funny sketch and there he was… watching tennis! Why wasn’t the Champagne popping? Where was the trophy? I realized, sure, it had been a thrilling experience–for me. For Graham it had been just another day in the salt mines.

“That was fun,” he said. “Would you like a cuppa tea?” We went on to write a few others things during the 18-or-so months that I got to know the man before his death, but for my money nothing ever surpassed that initial time when I sat at the feet of the great Buddha and learned how to create and build a sketch line-by-line; how to let go and let it take you where it naturally wants to travel; how to build up to the punch line, even if it’s not the punch line that you expected–especially if it’s not the one you expected because that’s when you know the sketch is born alive and not delivered dead-on-arrival.

Looking back I can now see that, like all great mentors, the things that Graham taught me about writing comedy he taught accidentally, by showing me how to do it. Any trepidation I had that day about taking him up his offer to write together had more to do with my ego than his. It was not a grand scheme designed to show-off his brilliant wit at my expense, or how ‘generous’ he could be. It was the genuinely selfless gesture of a truly humble man. That’s more than a lesson in comedy, it’s a lesson in life. I was mentored the same way that I was born. By accident.

When Graham died of cancer in 1989, he even managed to do that in classic Chapman style: passing away just one day shy of Monty Python‘s 20th anniversary. Fellow Python, Terry Jones, called it “The worst case of party-pooping I’ve ever seen.” I couldn’t help thinking that he’d done it again, delivered the consummate punch line with his usual pitch perfect timing.

What were the ‘Smiths up to in September?

How to Write a Winning Job Description

Why Brevity is a Copywriter’s BFF

The Perks of “Perfect Enough:” Why Perfectionism Holds Writers Back