When manning your corporate social media channels, ever wonder:  How do I capitalize on a pop culture trend without getting sacked by Twitter trolls or Facebook haters? This week, we applaud two retailers who turned the #DeflateGate football fiasco into a social media touchdown for their brands. It’s part of our new marketing win series, “RAD-vertising.”

An NFL investigation, a “Saturday Night Live” sketch, and an eyebrow-raising weekend press conference by Coach Bill Belichick on how “rubbing” footballs changes their matter have made #DeflateGate one of the most viral hashtags of 2015.

It all started Monday morning with rumors that 11 out of 12 footballs used in Sunday’s NFL Playoffs were under-inflated, casting the New England Patriots’ win into doubt. As allegations of cheating flew, fans rallied to both defend and sling mud at the Patriots on Twitter, Pinterest, and more social media.

Instead of watching this incredible Twitter trend flash by, two savvy non-sports brands slyly used the scandal to promote their products. Krispy Kreme Doughnuts tweeted a photo of a football-shaped pastry propped on the gridiron with the teasing tagline, “Ours are fully filled.”

The clever joke resulted in more than 3,480 retweets and 2,250 favorites by “Tweeps,” or Twitter users, in addition to dozens of replies and discussions.

Likewise, Bed Bath & Beyond tweeted a photo of a Duck Dome Rechargeable Air Pump with the equally pithy, “You know… In case anyone needs one of these before the big game.” 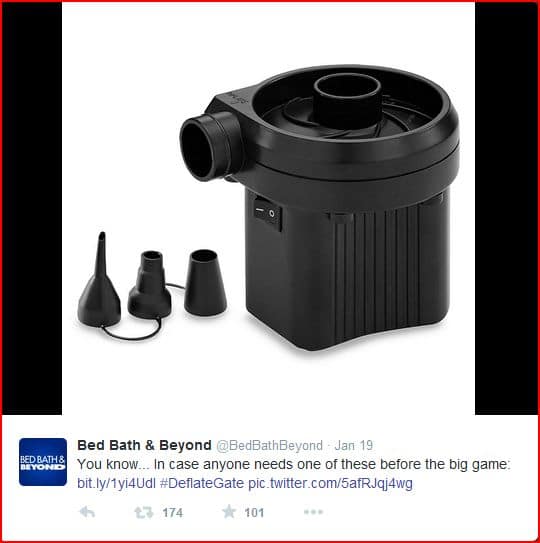 We applaud both tweets for using a playful tone, employing appealing images, and, most importantly, being timely and shareable. The brand managers wisely didn’t take sides in the heated #DeflateGate debates; they merely touched on it and used the upswing to promote their merchandise.

We’re already craving doughnuts for Super Bowl Sunday. How about you?