Britain has officially decided to leave the European Union. How did this happen—and how was copywriting involved? 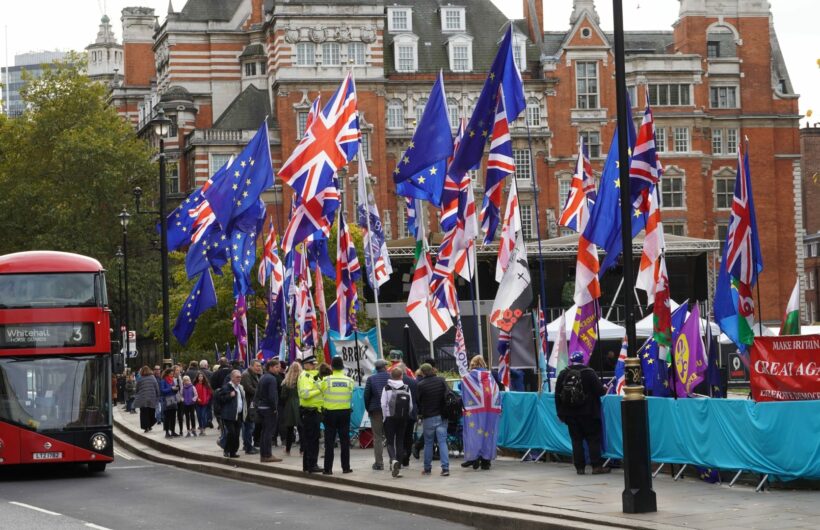 Last week, 17.5 million British voters gathered to make the biggest decision my home country will ever make. The day before the British referendum on whether to stay in the EU, with my postal vote in the mail, I took my burgundy British passport – the one with “European Union” printed in gold letters at the top – and headed to the USA, a country soon to face a momentous decision of its own.

Late on Thursday 23 June, in a San Francisco burger joint, I grieved. I grieved for the EU, that crazy, forward-thinking, inspirational idea that in many ways had just come to a shattering end.

Thanks to an unnecessary referendum that shouldn’t have happened in the first place, Britain voted to leave the EU. Markets plunged into freefall, the pound hit a 31-year low, and forecasts spoke of a looming recession.

How did this happen?

If it’s not already clear, I voted to remain. As a staunch believer in the strength of working together with our neighbors, I bemoan the Brexit result.

But as a web copywriter, as much as it pains me to say it: the Leave camp earned their victory. Although scarred with bigotry and empty promises – that they’re now rapidly backtracking from – their campaign was stronger, better organized, and delivered with more passion.

So, in an effort to take something positive from the mess the UK has descended into, let’s take a look at what the Brexit Leave campaign can teach us about better copywriting.

In an attempt to win over British voters, Remain campaigners, led by David Cameron, focused on the economy. They highlighted the risks of leaving and the likely negative impact on the economy. Their data was sound, backed by the country’s top economists.

The problem was most British citizens didn’t connect with the economy argument. It was too confusing, too inaccessible. They struggled to see the possible negative effect on their own lives.

On the other hand, the Leave campaign’s messages were easy to understand. Under the slogan “Take Back Control”, they advocated a return to British sovereignty and stricter immigration control. Their promises were simple: a Britain for the British and a cutback in the growing tide of immigration.

They made their messages memorable and plastered them where they’d be seen. And it stuck. Astonishingly, 47% of British voters believed the claim that the UK pays £350m a week to the EU, but only 17% believed the Treasury’s forecast that Brexit would make each household £4,300 worse off per year.

As copywriters, what can we learn?

For our messages to be powerful, they have to be easy to understand.

If a well communicated but completely unfounded message can convince British voters to ignore their economic concerns in favor of populist issues, just think what a well-written, accurate message can do for the power of your web copy.

Does That Hurt? Prodding at Pain Points

While the Remain camp were appealing to the logical desire not to see your country’s economy flushed down the toilet, the Leave camp were pulling at heart strings.

They hooked voters by prodding at pain points to stir emotions. They implied an attack on Britain’s beloved National Health Service by suggesting health funding was being siphoned off to the EU. They poked at the ugly xenophobia that skulked around talk on immigration.

When the Remain camp aimed for emotions, they often missed the mark. They were accused of employing scare tactics. In their campaign branded “Project Fear”, an endless possession of experts blundered center stage to deliver a new forecast of “economic doom” – from Barack Obama’s warning that a post-Brexit Britain would be “back of the queue” in US trade deals, to the former head of MI5, Dame Eliza Manningham-Buller, declaring “to leave would present real risks to our security and safety”.

Rationally, you’d think the final decision would have hinged on economy, but there’s a big difference between rational box ticking and the emotional impact of issues that hit close to home.

In an attempt to make the British public comprehend the real economic dangers of Brexit, Remain were alienating voters. Conversely, Leave were hitting pain points and putting a positive spin on the future – more money for health, more control over borders, more freedom to make our own laws.

In terms of copywriting, this underlines the power of aggravating a pain point. Addressing your customer’s pain in your copy is powerful. It stirs emotions and grabs attention. People are influenced by emotions when it comes to buying a product or service. We tell ourselves our buying decisions are logical, in fact, most of our purchases are based on emotions.

Activing emotion in your copy is critical. If you only make a logical appeal, you fail to hit the most important driver in decision making – emotions. Words that create scenario that triggers these emotions in the buyer is, ultimately, what makes the sale, or clinches the vote.

In perhaps the most British campaign stunt imaginable, Leave leader Boris Johnson spent weeks touring the UK in a big red bus emblazoned with the words: “We send the EU £350 million a week, let’s fund our NHS instead.”

Despite this figure being widely disputed, the power of such a bold, emotion-inducing claim can’t be ignored.

The Leave campaign knew this. The message turned up everywhere – from TV interviews to flyers stuffed through front doors. Why? Because Leave campaigners knew the power in a message that shocked people. It struck a nerve in a public proud of their free health service, and it stuck in the mind.

Hang around in copywriting circles long enough and you’ll eventually hear how critical attention-grabbing headlines are for copy success.

As legendary copywriting, David Ogilvy, claimed: “On the average, five times as many people read the headlines as read the body copy.” Making that first contact with your audience attention-grabbing is critical, whether it’s the opening line in an email or the headline on your homepage.

Applying these simple strategies to your copy can do wonders for your website. If only fixing the new future post-Brexit was as straightforward.

While I’m still lamenting the result, there’s hope – whether it’s a possible re-vote or the chance it might not be so bad after all.

As the soon-to-be newest member of the MarketSmiths copywriting team, I’ll be stateside in November, when millions of Americans will cast votes that, like Brexit, will have repercussions far beyond their country. I hope that, if nothing else, the surprise Leave win will serve as a reminder that nothing in governance is certain. And that those who believe that closing borders – or building walls – only weakens and divides will make their voice heard on election day.

Even Sandwiches Can Teach Setting: Writing Brooklyn with The 5 Senses