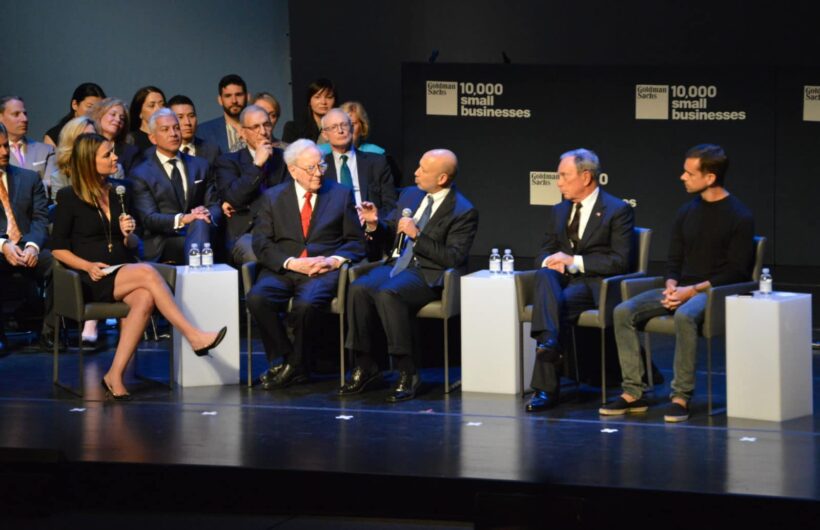 At a quick glance, you might think small businesses have little in common with large corporations. But the truth is almost every big business started out as that little engine that could, chugging along to make a name for itself.

I was fortunate enough to attend this year’s Goldman Sachs’ 10,000 Small Businesses (10KSB) graduation ceremony–an event with the star power to attract at least a dozen media outlets. (Thanks again for the invite, Jean!)

“The Past is the Prologue”

Before the official graduation, Today Show co-host Savannah Guthrie conducted a panel with the four business legends above, discussing how to effectively grow your small business in the current market.

Warren Buffett called the U.S. a “golden goose laying golden eggs,” referring to the economy’s growth since 1930 (his birth year). He went on to say that the luckiest person in the world is a baby being born today. Though the competition level is high for small businesses, people have more opportunity and potential than ever.

But how do we reach that potential and take advantage of those opportunities?

“It’s All About People”

Claiming it’s “all about the people” you hire, Jack Dorsey highlighted the importance of passion. He told entrepreneurs that they could teach employees any skill, but they couldn’t teach passion.

Adding to his point, the Twitter co-founder and CEO suggested that efficient hiring isn’t just about who you hire–you need to make sure your employees complement each other. (Not “compliment,” like Hey man, cool hat. “Complement,” like skillsets that help them make each other better.)

Mike Bloomberg also stressed the significance of management, advocating open-floor office plans. “Rip down the walls,” he advised. When you sit in the middle of your employees, you create an accessible, collaborative work environment–the key to success for a company of any size.

Buffett then flipped the coin, explaining how business growth does rely on people–but not just your employees.

“Delight your customers,” he encouraged. Citing Amazon’s Jeff Bezos as a prime example, Buffett urged small business owners to create a customer experience that goes way beyond the price they pay. With an unforgettable experience, customers won’t just be satisfied with your brand–they’ll tell their friends about it. And that’s how a small business grows into a large one.

“Look at You Now”

The brilliant panel offered incomparable business acumen, but my personal highlight was a 10KSB graduate’s speech.

Roy Castro, owner of D&M Ice Cream, detailed his journey–from serving time in prison to growing his own ice cream distribution company into a $6 million business.

I’d be lying if I said I wasn’t deeply affected when he quoted his mentor, saying: “You used to be judged by the company you kept. Look at you now.” Castro then gave a hilarious shoutout to the panel, joking, “Wassup, Warren?”

He thanked Goldman Sachs, his fellow small business owners, and a nonprofit called Strive, which helps at-risk youths land jobs. Castro approaches business differently now, calling Strive his “high school” and 10KSB his “college”–because both equipped him with the tools he needed to transform his life.

For a deeper look at this event–and the 10KSB program as a whole–please check out Jean’s insightful Forbes piece.