As copywriters, we’re particularly interested in where slang originates and how language evolves to incorporate new words and phrases. We wondered if these changes are really happening faster than ever on social media, and particularly in the “memes” that spread on Twitter, Facebook, and Instagram—so we did a little digging to get to the heart of the matter.

How Does Language Evolve?

First, the original question: Where does slang come from? Language sets humans apart, and the question of how language evolves is a pretty loaded one. After all, humans evolved to communicate with language in the first place—and we haven’t stopped evolving since.

According to the Linguistic Society of America, changes in languages like English often begin with young people, and can occur in several different ways. For example, slang words might be borrowed from other languages, abbreviated from other words, or finagled by re-imagining or even misunderstanding an existing word.

Language has always been evolving—just look at Shakespeare or Beowulf—but new slang words and terms might be spreading more rapidly in the Internet age. Interestingly, the Internet also makes it easier to see how slang spreads. As an example, see this study out of the Georgia Institute of Technology in Atlanta, which tracks the origin of words and their geographical spreading over time.

Of course, that only partially answers the question: we can see how slang spreads, but that doesn’t explain why it sprouts up in the first place.

One theory about cultural spreading actually goes back to the origin of memes. Originally coined by Richard Dawkins in 1976 in his book The Selfish Gene, the exact meaning of a “meme” is one attempt at understanding why we pick on new ideas so excitedly.

Defined most simply, a meme is “an idea, behavior, or style that spreads from person to person within a culture.” But what sets Dawkins’s idea apart is his theory that memes “evolve” in much the same way that species do: the best ones spread the farthest, and even adapt or mutate when necessary, while the less successful ones die out. You might compare this to the concept of a “viral” video, in which videos are viewed as living things that go around infecting everybody, whether they like it or not.

It’s an interesting concept that could explain why slang words and cultural trends are so important. However, keep in mind that Dawkins’s ideas are controversial, and still haven’t been embraced by everyone.

Dawkins’s writing about memes is fascinating—but it’s not the reason that we’ve been hearing so much about memes lately. Memes have exploded lately, almost entirely because the term has been applied to what’s now called an “Internet meme.

According to Wikipedia, an Internet meme is “an activity, concept, catchphrase or piece of media which spreads, often as mimicry, from person to person via the Internet.” It’s a wide label that includes slang and behavioral trends, like planking or taking selfies, though many people hear the word “meme” and automatically jump to image macros with Impact font, like so: 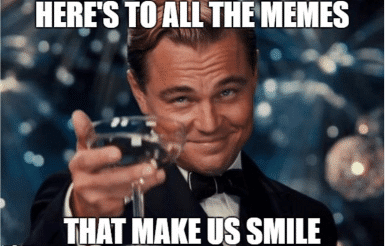 Okay, but what’s really new about an Internet meme, and how is it different from what Dawkins was talking about?

The medium has changed, but the ideas are largely the same—and most importantly, they don’t live exclusively on the Internet. Memes that are spread and shared online eventually enter the popular lexicon, and though I don’t know anyone who’s entirely offline, such a person would still encounter meme-y terms and phrases.

Why Should Copywriters Care?

For some people, like our grandmothers, language is a thing best left alone. My generation might talk about who “is bae,” but for the purists, silly slang has no place in the dictionary, regardless of what the Oxford English Dictionary thinks.

Copywriters tend to disagree. Often, the best copy is the kind that captures the voice of its time and place in a way that seems genuine, authentic, and funny. Of course, copy needs to serve its goals, and snarky millennial-speak isn’t the right choice for every business, brand, or campaign.

Most importantly, though marketers can incorporate popular memes into their advertisements, they need to do so carefully. It’s much too easy to sound like an out-of-touch corporate shill when you’re mimicking the language of the young and hip.

That’s largely because memes are among the most organic creations out there. They almost never come from the top down: they rise up seemingly out of nowhere, and are propelled by their viral nature. In that sense, memes are just like the kind of trends that predate the Internet.

In other words, a marketing team might be able to latch onto a successful meme, but they’re not going to come up with one on their own—that’s just not how memes work. And yes, Twitter is littered with try-hard branded tweets that attempt to harness a great meme and end up sounding like your grandfather telling you he’s “on fleek.”

Of course, an argument could be made that these don’t always fall as flat as it seems—after all, they get attention, likes, free publicity, and re-tweets. But good copy shouldn’t just be about getting views. You want to foster a sense of connection to your brand—after all, isn’t that the whole point of social media marketing?

For many, it may be best to avoid memes at all, but it’s important to recognize that some advertisers can harness their power successfully. See this tweet from Bagel Bites: Impressively, this meme pokes fun at ads that pander to young people with memes, all while appropriating a meme about that very subject!

So, what have we learned? For starters, when we talk about memes, on the Internet or otherwise, we’re really just using one theoretical approach to view the ways in which language and culture evolve and spread over time. These changes usually begin with young people, and in the Internet age, they can happen rapidly.

Organic, often ironic, and almost always humorous, Internet memes are an integral part of the culture, so it’s only natural that marketers and writers should want to emulate them to reach a younger demographic. But that’s easier said than done—in fact, it’s nearly impossible.
That being said, some of the best writers have proven that they’re up to the challenge. If there’s a better argument for the importance of smart, relevant copy, we haven’t heard it yet.

Looking for the right words to engage your younger customer base? We’re here to help! Contact us now.

How Great Copywriting Has Shaped America at Every Turn