Tweeters have to fit their messages into 140-character, bite-sized pieces. Sometimes this goes right—and, sometimes, it goes horribly wrong. 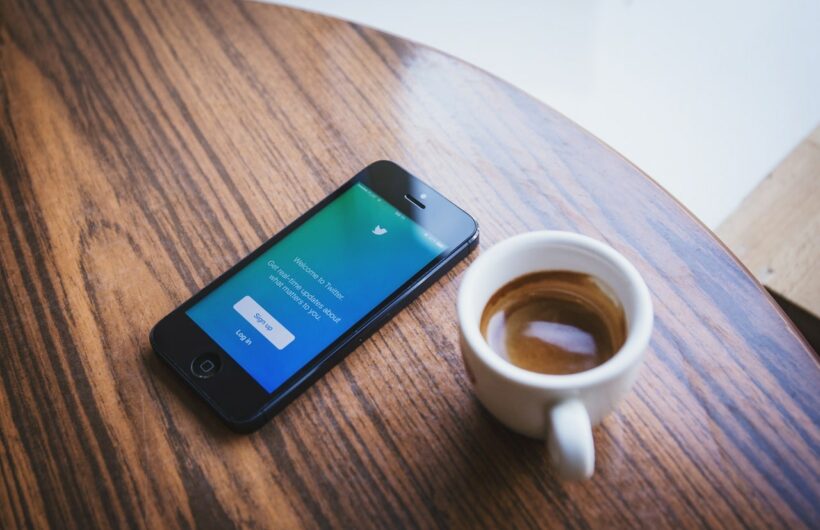 In just over a decade of existence, Twitter has profoundly re-shaped the way people interact with one another online. It connects us in brand new ways. Twitter brings unreachable celebrities right to our phones—almost as if we’re texting them—and reduces the news cycle to mere seconds. It’s also a great medium for nascent political movements, content marketing, and the amplification of unheard voices.

As copywriters, we’re especially interested in the ways in which Twitter transforms short snippets of quality copywriting into powerful, widely disseminated messages. Sure, Twitter now incorporates photos, videos, and links, but anyone who’s used it knows that—unlike Facebook, Snapchat, or Instagram, for example—it’s a primarily text-based medium.

Here, we’ll take a look at some of the most memorable milestones in Twitter’s history, focusing on those that highlight an age-old truth: that the tweet is mightier than the sword.

There’s no doubt that Twitter can be used for evil, too. From Anthony Weiner’s endless mishaps to its use by ISIS, it’s had its share of bad press. And any search into Twitter’s best tweets will turn up plenty of mindless minutiae about One Direction, Taylor Swift, and Kim K. But as writers, we believe that the cream ultimately rises to the top—so without further ado, here’s a little bit of that cream, which we believe speaks to both the possibilities and the power of short, straightforward messaging. 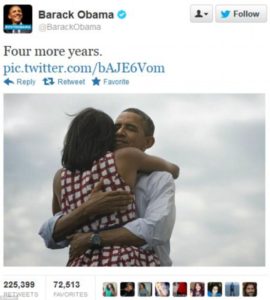 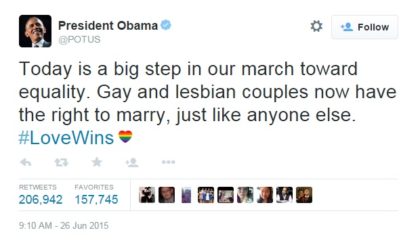 Twitter launched in July 2006, and grew tremendously in popularity over its first couple of years. Barack Obama was elected in 2008, and his embrace of Twitter highlights its growth. Perhaps the most famous is his “Four More Years” tweet—a short and simple message that resonates in part because of the accompanying image—which was the most re-tweeted ever at one point, posted just after Barack won his re-election campaign against Mitt Romney.

But our 44th President—and the first ever President to hold a Twitter account—has tweeted many times to communicate with Americans. For example, after the Supreme Court ruled in favor of legalized gay marriage in 2015, Obama tweeted out a now-famous celebratory message with the hashtag #LoveWins. Through good times and bad, Obama has successfully used Twitter to reach ordinary Americans, and young people especially.

Connecting Us with Celebrities

For better or worse, Twitter gets us closer to celebrities than ever. If they choose to share, we know where they are, what they’re eating, what’s on their minds—and perhaps most importantly, we can respond and even spark a conversation.

Yes, there are the embarrassing snafus and unintended tweets—usually quickly deleted (as if we didn’t take a screenshot first). But there are also moments of real humanity that come bursting forth, unexpectedly, from our glossy digital screens. 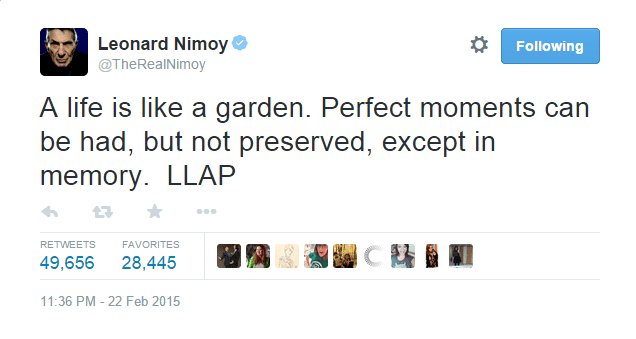 As examples, consider Caitlyn Jenner’s message to fans and followers shortly after revealing her trans identity, or Leonard Nimoy’s final sign-off, invoking Spock’s “live long and prosper”—both of which were re-tweeted widely.

Years from now, when we look back at Twitter’s signature moments, perhaps the most discussed will be its role in igniting various political and social movements. From #BlackLivesMatter to #YesAllWomen, Twitter users have found clever ways of turning the platform into a voice for the voiceless.

What is it about Twitter that makes it such a good avenue for these kinds of movements? In part, it’s likely its democratic nature: essentially, all tweets are created equal, as long as you’ve got followers. Plus, the most powerful tweets quickly build momentum through re-tweeting and sharing.

But we believe it also has something to do with great copy. Tweets are snappy by nature—they’re always limited by that 140 character count—and the best ones harness that as a tool. Hashtags in particular are punchy and poignant, and lend themselves perfectly to empowered chanting.

Looking to the Future

Twitter isn’t going anywhere soon. Just look at the presidential race we’re currently embroiled in—both candidates use Twitter, and not just for short, staff-written campaign messages. In fact, for Donald Trump, Twitter is an essential component of his personal brand—a brand that has shaped voter’s mindsets and driven millions to his unforeseen, rabble-rousing campaign.

It seems there’s a social media platform for everything these days, from sharing micro-videos to hunting for jobs. That being said, Twitter remains unique because it champions the written word in short, digestible forms. Great tweets demonstrate that a few words can lead to a whole lot of discussion.

Great tweets can help you capture your audience’s attention. Need help crafting them? We can help—let’s talk!

The sound of success: How Spotify mixes data and zeitgeist to attract 286 million monthly listeners