Slam Dunks and Total Flops: What Copywriters Can Learn from NBA Playoff Slogans

NBA teams have started to develop their own slogans, but are they game-changers? We offer our verdicts how successfully four teams have managed to craft a compelling message. 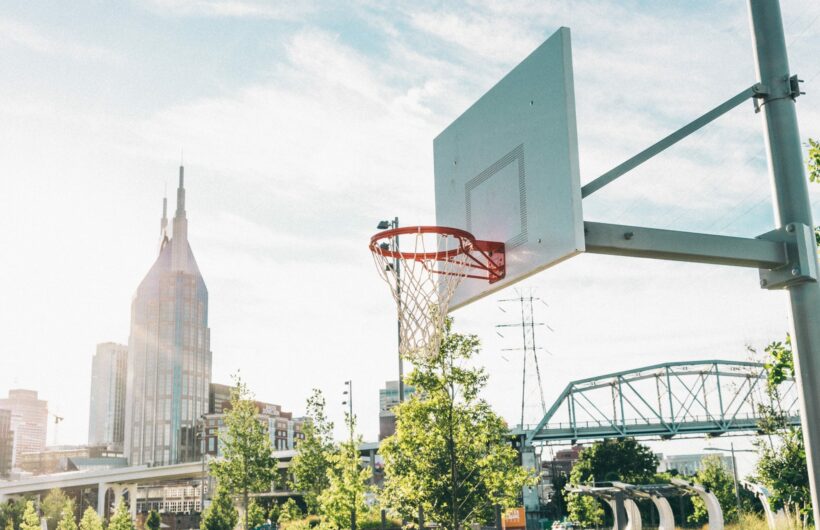 NBA giants like the Chicago Bulls, New York Knicks, and Los Angeles Lakers have cultivated nearly-indestructible brands, hauling in millions of viewers and billions of dollars year after year, regardless of whether the team is actually fun to watch. Yet in many ways, team “branding” is a relatively new concept in professional basketball—as it is in many sports leagues.

That might explain why basketball teams have not historically harnessed the power of really good copy. For decades, in fact, most teams lacked slogans—or even nicknames—beyond the ones gifted to them from adoring fans and broadcasters, like the Olympian “Dream Team” or Portland’s “Rip City.”

But you can’t get by in 2017 without great marketing, which is why every NBA team now has its own official motto—or at least, all of the good ones. One of the challenges of sports branding is that not every team has a chance to win anything—or even a strong team identity—which NBA teams have partly solved by waiting until the playoffs to start plastering these campaigns on every rally towel and T-shirt in the arena.

Even so, copywriting challenges remain for these franchises, whether the team is good or bad. It’s tough to balance authenticity with organic fan excitement, and even harder to come up with something new every year.

Here, we’ll take a close look at four NBA teams’ recent attempts to win over fans and generate excitement via copy. Some are great, others are absolute airballs, but all are graded on a generous curve.

Background: Last June, the Cavaliers won their first championship literally ever behind the stellar play of Ohio-born world-beater LeBron James, and they’re still pretty damn pumped about it. They’ve got a shot at a second trophy this year—plus LeBron has managed to popularize “The Land” as a nickname for the city of Cleveland, which is way better than the Mistake on the Lake.

From the team: “The reigning 2016 NBA Champion Cleveland Cavaliers have one goal in mind: REPEAT. So let’s do it again, Cleveland! It’s time to DEFEND THE LAND!”

The challenge: The Cavaliers are one of the best teams in the league, and they’re almost definitely going to return to the NBA Finals this year with a chance to repeat as champions.

But as any good copywriter knows, that’s a challenge in and of itself: after all, how do you sustain that kind of momentum without seeming arrogant or resting on your laurels?

Our verdict: With their new slogan, Cleveland has probably done as good a job as possible of balancing fan exuberance with the intensity and focus needed to win again in the NBA Finals. I still think “the Land” is a little cheesy, but the city of Cleveland—and the team’s mostly lamentable history—doesn’t give them a whole lot to work with.

Background: A once-great team that won a championship in 1971, when future Hall-of-Famers Kareem Abdul-Jabbar and Oscar Robertson were still its leaders, the Bucks have been mired in mediocrity for years.

Though a charismatic coach and talented young players (including the well-branded “Greek Freak” Giannis Antetekounmpo) have given fans a glimmer of hope, the Bucks have only won two playoff series since 1989.

From the team: “The new Fear the Deer platform strips away the periphery of the Bucks brand, leaving the focus squarely on the team and setting a simple, aggressive tone.”

The challenge: In the last decade or so, the Bucks have shuffled owners, switched up their uniforms, and even undergone multiple court re-designs. Needless to say, the “brand” identity is in flux, which is almost never a good sign.

They’ve also tried out several bland and uninspiring slogans over the years, like “Work Hard, Play Hard,” and “Ready to Rise.” Though it seems no one’s quite sure where “Fear the Deer” originated, the team’s been using it to drum up playoff energy since 2010.

Our verdict: It rhymes, it’s both intimidating (kind of) and funny, and fans seem to like using it on the Internet. It would carry more weight if the Bucks were actually a scary team, but with rising stars on its roster, that transformation could happen sooner than later.

Slogan: Run as One

Background: After a disappointing 2015-2016 season, the Rockets are back in 2017 with a new coach, a new identity, and an intimidating team loaded with smart, tough marksmen. Some of their previous marketing attempts have fizzled—recent failed slogans include “Pursuit” and “This Is H-Town”—but they do have a truly great nickname (“Clutch City”) sitting in their back pocket whenever they need it.

The challenge: The Rockets don’t seem to have any major marketing challenges right now. The team is really, really good, but they haven’t won anything yet, so they don’t inspire legions of haters quite the way Cleveland and Golden State do. And though superstar player James Harden can be polarizing, his combination of wacky beard and mega-talent make him easy to market and impossible to forget.

Our verdict: I’m pretty sure Houston’s marketing team chose this slogan because they’re afraid of being seen only as James Harden’s team, preferring to project a spirit of unity and teamwork. Unfortunately, they missed the mark in just about every way—the slogan is generic and clichéd, it’s too silly for a rallying cry, and I’m not even sure it’s for the right sport.

Slogan: We the North

Background: When the Vancouver Grizzlies moved to Memphis, the Toronto Raptors became the sole NBA team located outside of the United States.

Since then, the Raptors franchise has had its fair share of ups and downs—but mostly downs. The team’s win-loss records have been disappointing until recently, and the fan base has experienced its share of isolation from both sides—basketball fans in the U.S. tend to view them as outsiders, while most native Canadians still prefer to watch hockey.

From the team: “Far from the East side. Miles from the West side. Nowhere near the South Side. We are the North side, a territory all our own.”

The challenge: Despite its underwhelming history, the Raptors roared back in 2014 with a new General Manager and a fresh, exciting backcourt duo. They set a new franchise record by winning 48 games, then made the playoffs for the first time in six years.

The team was on the rise, but it seemed perpetually limited by its outsider status. So team execs reached out to Sid Lee, a major creative services firm, to come up with a re-brand. “We the North” was the result—a slogan and rallying cry rolled into one—and the team’s full-fledged campaign quickly caught on with fans.

“The unity is what makes it so authentic,” says Shannon Hosford, marketing and communications vice president at Maple Leaf Sports and Entertainment, which owns the Raptors. “We don’t want someone [in another city] to fully understand it. They just couldn’t possibly identify with our experience in the NBA over the years. It’s ours and ours alone.”

Our verdict: It might have been developed by a marketing team, but “We the North” feels organic, and that’s what really matters. Raptors fans have warmly embraced the new motto, including Drake, and it has now officially wormed its way into the sports lexicon—ultimately becoming something much bigger than a playoff slogan.

Everyone can benefit from better copy, whether you’re a championship-winning basketball squad or an upstart small business. Get in touch today to see how great copywriting can take your brand to the next level.

Sales Decks that Focus on the Customer: Financial Copywriting that Shows You’re in Touch

Why The Best Beauty Copywriting Is Sensual