A guest writer takes us back to first principles—"Just how do you do this 'copywriting' thing?"—and offers five tips to guide you through the entire process, from brainstorming to execution. 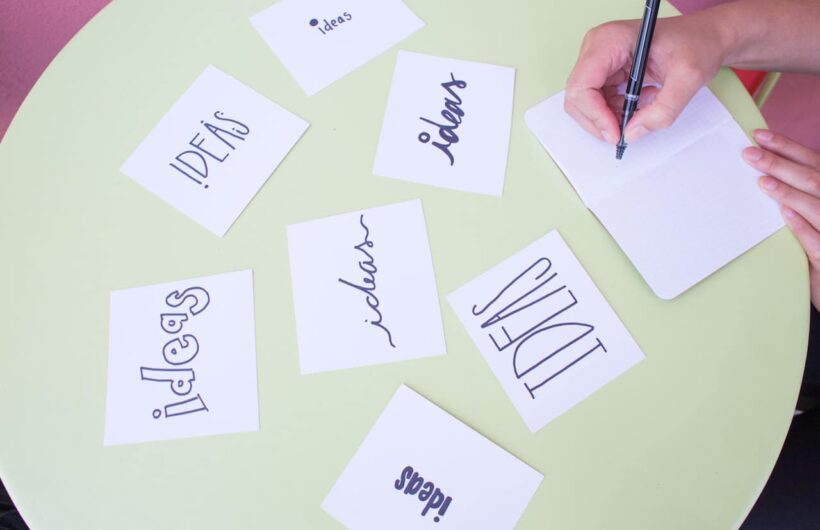 Our guest writer Sarah Lybrand is no stranger to the joys (and perils) of the creative process, having lent her storytelling skills to some of the world’s biggest brands and most exciting startups. Here she shares hard-won advice on what it takes to bag your next big idea.

As the generators of valuable, impactful, revenue-driving content, our role is to do more than just write beautiful, effective copy. No matter what kind of marketer you are—editorial, lead gen, UX, public relations—more than half the job is often the work that leads up to production: the crafting and pitching of ideas that sell.

Now, I’m no Seth Godin or Don Draper. I claim no mastery over the creative process. But I’m a working copywriter (as in, I get paid, in real money) and I credit less my writing chops, than an intentional focus on honing my ideas, believing in them, and getting other people to get behind them too. Whether you’re an entrepreneurial CEO, in-house marketer, or a freelance copywriter, the best way I’ve found to stay in business to is dream up the business yourself, and then sell it to whoever’s buying.

No easy task of course, especially when what really matters to clients is the end product: the final copy, the polished website, the slick new sales asset. Results over process. Wins over losses. But sometimes clients – and yes, even consumers – don’t know what they want until they see it. And they can only see it, if you pitch it. And you can only pitch it, if you’ve spent quality time thinking it through, and putting it through the rigors of whatever creative process works for you. I have one that works for me (and I share it below), but the important part is not to approach this as a box to be checked, but as an opportunity and a shortcut to getting better work done.

To get at the deep thinking required to weave brand, product, and messaging into one piece of content, here are five ideas on how to pitch so your boss, client, or end-consumer can’t help but pay attention:

No matter what’s being sold, there’s always room for Self in marketing and copywriting. What ideas can you uniquely offer on this subject? Or, if needed, whose shoes could you step into, to better empathize with your end-consumer? Go ahead. Sit in that seat for a while, live there. Ideas, words, phrases, or topics could come to you that speak directly from this knowledge. Own who you are – or, what you’ve learned about a pain point – as a starting place from which to brainstorm. In other words, in MarketSmiths-speak: think and feel like a real human, and everything else should fall into place.

Finding time to sit around and daydream sounds a lot like a three martini lunch — an impractical luxury more likely to hinder your work than help you get it done. But I’m here to warn you that if you’re the kind of harried marketer turning in the first seemingly brilliant ideas that come to you… you’re probably leaving a whole lot of gin—and valuable creativity—on that lunch table.

For example: ever notice that when you’re trying to capture the best pose, framing, and lighting for a photograph, even if you took a hundred shots, it’s often the last snap you take that you like best? My very best ideas often spring from the final-ditch, bottom-of-the-barrel garbage I scrape out of my brain after an hour of brainstorming, when I realize that all the work I’ve just done was only practice for the ideas that arrived just as I was packing up for the day. So, leave yourself plenty of room to marinate. Treat the investment of time not as an indulgence, but instead, a critical element of success.

Everyone has their own process for brainstorming so I wouldn’t presume to tell any Creative the best way to channel their muses. But I will recommend, with full confidence, that whatever you do… do a lot of it. Way more – maybe even tenfold – what you think is needed to get the job done. Presenting a couple options for a new sales campaign to your boss? There should be at least three well-developed concepts on the cutting room floor. Turning in possible headlines for an SEO article? Here’s hoping you wrote at least 50 before settling on your top ten.

Because the longer you think on it, and the further afield you push your ideas, the closer you get to messaging that’s fresh, unexpected, and out-of-the-box. In this part of the process it’s quantity – and not quality – that will get you there. Be a no-holds-barred firehose of ideas until you’re completely tapped out, and then go another round. You’ll thank me later.

Some good news: when you’ve happened upon some really, really good ideas, deep down, you’ll probably know it. So then it shouldn’t be too hard to separate the wheat from the chaff. Find the best ideas out of your pile of brainstorms, and then torch the rest.

Just kidding! Don’t torch them. In fact, save them. All of them. In a notebook or a pile of notes or in a doc you dump all kinds of rejected stuff into. Because when your so-called really good idea turns out to be just okay, which happens too, not to worry – you have five more concepts ready to roll. By not getting too emotionally attached to any one idea, nor  the eventual wrapping it gets, the better prepared you are to draw from, pull, swap, move, shift, and adjust your thinking to fit the needs of the moment.

A screenwriter friend of mine often says that if you can’t figure out what the movie poster is going to say, then you probably don’t have a movie. So even though the elevator pitch might be arduous to get just right, it is THE key to selling your idea. Which leads me to even more good news: spending the extra time to craft the language in the paragraph or two that will sell it to stakeholders, is always worth the time (even if eventually rejected. Because, see #4). Do a little research, think through your proof points ahead of time – even if you don’t include them all in the pitch – to ensure the idea is rock solid and that once approved, it won’t take much to fill in the details. Nothing’s worse than having a stakeholder buy into an idea you can’t deliver.

For me, I try to write up the idea as if it were the pithy opening paragraph of a persuasive asset (and no joke, often steal directly from it once it goes into production) because ideally, the pitch already contains all the elements of a successful outline for the finished work: a clearly defined thesis, a compelling hook, inherent brand alignment, and a succinct distillation of the idea. So, as much as possible, front load your effort on this part of the process, and you’re sure to save time on the back end.

Though careful brainstorming and pitching might seem like more of an administrative chore, I recommend thinking of it like that three-martini sales lunch: yes it’s indulgent, and no you won’t get those hours back—but damn if it wasn’t a fun investment of time that might just land you the work, and results, you’re after.

Are you after the kind of copywriting that makes your customers drunk with desire and inspiration? Get in touch: info@MarketSmiths.com, and let us pitch you a party platter of ideas to drive your business forward.

How NextEra Energy Reshapes the Language Around Renewable Energy

You’re a Thought Leader. Now Boost Credibility and Conversions With Your Blog