Horror film taglines have achieved what all copywriting strives for: one sentence that sells your product. 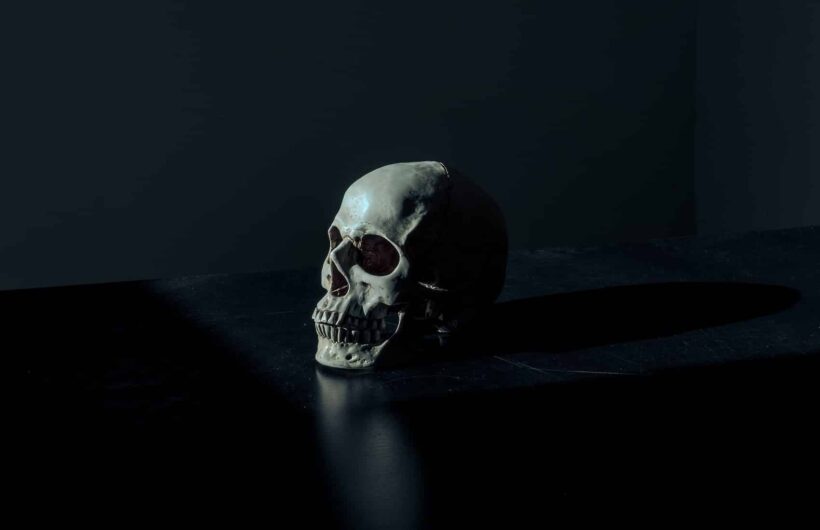 The spooky season is upon us and you know what that means—it’s time to break out the good horror movies and scare ourselves silly! Whether you’re partaking in the 31 Days of Horror Challenge, planning an eerie excursion to the movie theater on Halloween night, or, like me, watch horror movies all year round, there’s no shortage of frightful features lurking about to raise the hairs on the back of your neck.

But before you start leaping at jump scares and cheering for the final girl, take a moment to appreciate the subtle art of the movie tagline. The horror genre boasts some of the catchiest and most enduring taglines of all time, managing to achieve what all great copywriting strives for—to say a whole lot with very little.

So, grab your popcorn, turn out the lights, check the doors are really locked—and enjoy these shockingly good horror movie taglines (and the lessons they can teach us).

When it comes to horror, the pictures your mind conjures up are usually scarier than anything that can be shown on screen. That’s why fans are often disappointed by film adaptations of their favorite horror novels, and why the build-up to the monster’s full reveal is often scarier than the reveal itself. The human brain is the most brutal lens of them all.

The tagline for the 1982 slasher Pieces uses this principle to great effect, putting the onus on the viewer to imagine something truly horrifying. Between the suggestive title and the image of a chainsaw looming over a stitched-up body, the poster immediately sends your mind to chilling places.

Pieces’ tagline just confirms that, yes, what you’re imagining is real. It’s cheeky, it’s simple—and most important of all, it makes you nervous yet eager to watch.

Takeaway: If you can capture the reader’s imagination, they’ll do half the work for you.

Rather than playing on the dark ideas already floating around your head, the tagline for Wes Craven’s brutal debut horror flick The Last House on the Left plants a new one: that you might faint because the film is so scary.

The genius of this tagline is that it leaves viewers in an amped-up state before they’ve even entered the theater. Anxious at the very idea they might faint, there’s a greater chance that people will faint—or at least get a good fright out of the film.

Takeaway: If you do it right, playing with readers’ emotions can become a self-fulfilling prophecy.

John Carpenter’s iconic horror film Halloween introduced the world to the terrifying masked killer Michael Myers. But while future sequels, remakes, and reboots could draw readers in with the promise of Michael’s presence alone, in 1978, no one knew who he was. That’s why the film’s tagline had to get creative, declaring it to be about the night HE came home.

Who was he? Why was it so significant that he was coming home? Viewers didn’t know, but they were eager to find out, leading to Halloween becoming one of the most successful independent films of all time.

The tagline was so memorable that the cult sequel Halloween III: Season of the Witch even emulated it with the line “‘The night no one comes home.” Fittingly, that was the only film in the franchise in which Michael didn’t come home—or appear at all.

Takeaway: Plant the seed of intrigue in the reader’s mind and they will follow you anywhere.

With a title like Chopping Mall, you know you’re in for a good time. And the film’s tagline reaffirms this with a campy pun that ties perfectly into the film’s setting—an American mall during the height of 80s consumerism.

Chopping Mall’s punny tagline works because it’s tonally consistent with the rest of the film. You wouldn’t use a funny pun for a bleak movie like the aforementioned Last House on the Left. But for a delightfully silly romp involving robots and exploding heads? Absolutely.

Takeaway: Where appropriate, embrace the power of the pun.

Speaking of striking the right tone, the tagline for Carpenter’s The Thing does just that—and the tone it hits is uncomfortably cold and distant.

While most taglines address the viewer directly, The Thing takes a huge step back and refers to us as “man.” It’s unsettling, conveying the impression of an omniscient or perhaps even inhuman commentator watching dispassionately as the film’s events unfold… Or maybe the statement comes from the titular “Thing” itself.

The chilly, detached feel of the tagline resonates well with the film’s setting—a remote and isolated Antarctic research base, far from the comfort (or help) of other humans. Add to that the fact that the implications of the tagline are utterly horrific, and The Thing can draw shudders before the opening credits have even rolled.

Takeaway: Addressing the reader directly helps to build a connection—otherwise, your copy might leave them stranded (and thinking about how warm their insides are).

Horror fans don’t have a lot of nice things to say about Gus Van Sant’s (largely unnecessary) remake of Alfred Hitchcock’s Psycho. But there’s one thing we can all agree on—the tagline is pretty damn great.

Inviting you to “Check in. Relax. Take a shower,” the tagline might not seem sinister at first pass… Unless you know what fate befalls a character in the shower in the original film. And let’s face it—if there’s one thing everyone and their mom knows about Hitchcock’s Psycho, it’s the infamous shower scene.

Banking on the sheer infamy of its predecessor, the tagline for Van Sant’s Psycho successfully taps into the nostalgia that fans feel for the original, while still speaking to people who’ve never seen it. That’s a tricky line to walk, but it pulls it off beautifully—better than the film itself ever could.

Takeaway: Use what readers already know about you to entice them to learn more.

Another great example of playing off audience expectations, Saw II’s tagline serves as a knowing wink to the audience. The first Saw movie instantly gained a reputation for being incredibly violent and gory (despite the fact that, unlike the sequels, it didn’t really have the budget to show much gore at all). So when Saw II, came out the following year, audiences had a good idea of what they were in for—and the tagline confirms our suspicions in the best way possible.

With the air of stating something obvious, Saw II’s tagline works because it’s so simple. Blood in a horror film? What more could you ask for?

Takeaway: Simplicity is your friend.

Arguably one of the most well-known movie taglines ever conceived, Alien’s tagline manages to expertly evoke the isolation, futility, and dread at the heart of the film in just eight simple words.

What makes the tagline so haunting is the fact that it’s actually true. While movie-going audiences have always been accustomed to hearing explosions and yelling in space settings, the reality is, sound can only travel where there are molecules to vibrate. In deep space, there are no molecules—so your screams really would fall on deaf ears.

And as if that weren’t creepy enough, the tagline has one final trick up its sleeve. It begs the inevitable question—what exactly is making me scream?

Takeaway: If you can teach readers something interesting while selling to them, they’re more likely to remember what you have to say.

9. The Blair Witch Project (1999): “In October of 1994 three student filmmakers disappeared in the woods near Burkittsville, Maryland, while shooting a documentary… A year later their footage was found.”

Contrary to popular belief, The Blair Witch Project was not the first found-footage horror movie (see 1980’s Cannibal Holocaust and 1989’s The McPherson Tape). But the film was the first to use its found-footage angle as a central pillar of its marketing campaign, tricking many viewers into believing the filmmakers really were missing and that the footage they were about to see was 100% real.

The tagline played a crucial role in this ploy. Far longer than most, and more matter of fact, it reads more like a line from a newspaper than a movie poster, complete with compelling specifics like the location and date. You feel like you’re reading a report about an unexplained tragedy that’s finally been solved, and you’ll have to pay the price of admission to find out more.

Countless horror films tried to recreate The Blair Witch Project’s successes, saturating the market with so-called found footage until audiences barely stirred at the idea anymore. But even to this day, The Blair Witch Project captivates audiences with it’s raw, realistic scares—and the documentarian-like voice of the tagline remains a perfect encapsulation of that vibe.

Takeaway: If you can’t be the first to come up with a new marketing idea, be the best.

10. I Spit on Your Grave (1978): “This woman has just cut, chopped, broken, and burned five men beyond recognition… but no jury in America would ever convict her!”

Meir Zarchi’s I Spit on Your Grave is an uncomfortable watch, and the tagline doesn’t pull any punches about the violence in store. It delivers the shock factor masterfully, leaving you anxious yet determined to find out why the woman in question would never be convicted for such heinous crimes.

In fact, the tagline is so compelling that you barely notice it’s a lie. While the central character does cut, chop, and break numerous men, she doesn’t burn any of them. Oh, and she only kills four men. So unless she nipped off to burn a fifth while the camera wasn’t rolling, the tagline really doesn’t make any sense.

Maybe the person who wrote it didn’t actually watch the film—but they certainly convinced plenty of others to do so. And really, that’s all that matters.

Takeaway: You can get away with a lot if your writing is really, really good.

All treats, no tricks

If you’re worried that your business’ marketing copy might be scary—and not in the good way—we can help. MarketSmiths has a team of dedicated ghouls on hand ready to handle all your content and copy needs. Just don’t get them wet—or feed them after midnight.

Call us on the ouija board to find out more.