Sometimes honesty really is the best policy. Here's why telling the truth — but telling it well — is still the best strategy to win over customers in an age of hype. 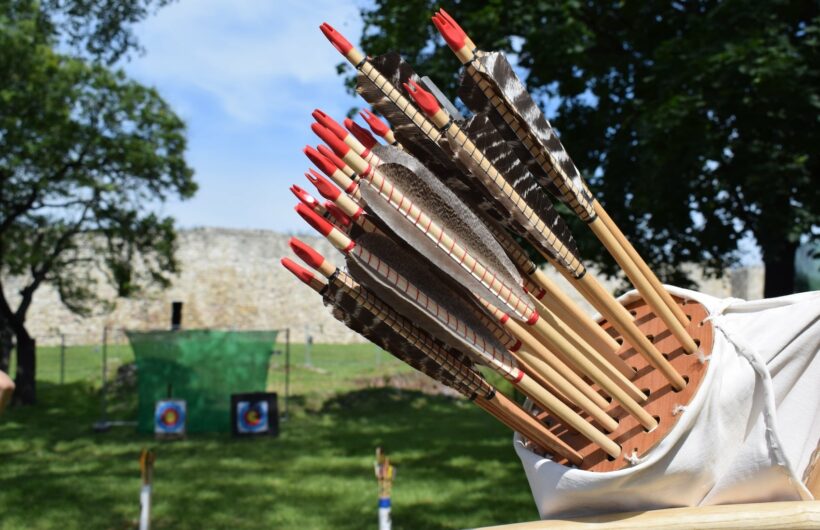 You can give your brand a personable voice. You can speak to your audience’s pain points. You can tell stories. You can paint engaging pictures with words. Each of these copywriting and marketing strategies helps cut through the noise to make your messages stand out.

But there’s one approach to commercial communication that far outshines all the others: telling the truth. Sounds simple, doesn’t it? And yet, copy that tells the truth in a fresh, eye-opening way is still a rarity—which explains why it’s so effective when a company manages to pull it off.

Before I share a couple examples of modern brands that are doing this whole truth-telling thing extremely well, let’s go back in time to when this breakthrough communication concept first appeared on the market.

The year was 1963. Most of the advertising of the day amounted to shameless hype, hyperbole, and embellishment. Every product was the “biggest,” “best,” and “greatest.” As the marketing adage goes, it was all sizzle, no steak.

This style of promotion presented a problem for Avis, the rental car company. Trailing behind Hertz and struggling to gain market traction, the company was falling deeper into debt—and needed to say something to the public to turn their business around. 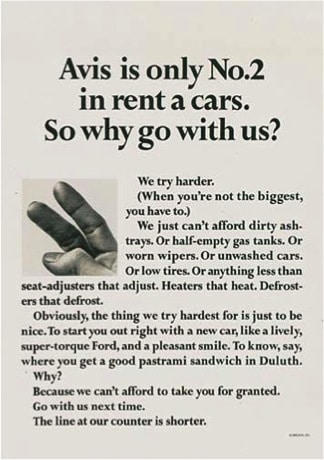 They couldn’t say they were the best—that distinction belonged to Hertz. So with the help of their ad agency Doyle Dane Bernbach, Avis went in another direction, one that was completely counterintuitive at the time. They simply told it like it was: They were #2.

Avis didn’t make a promise they couldn’t keep. Nor did they insult the public with glossy platitudes. Rather, they were upfront about their 2nd-tier status—and argued with wit and style why that was the very reason to choose them.

More than mere cleverness, this copy strategy leveraged a keen human insight: the underdog wants it more. People believed them, and in about a year’s time the brand went from 3 million in the red to over a million in the black.

This was one of the first ads of its kind, and it inspired what’s now become known as the Creative Revolution of the 60s, a new era of commercial communication which was marked by greater honesty and imagination.

Recently, I spotted a couple of brands who are practicing this art of radical truth-telling. The first campaign comes from the team at Squarespace, the stylish DIY website design platform.

In the connected age, is there any product more familiar than a website? For many of us, surfing a website is like breathing oxygen. We know what they do, how they work, and why they’re valuable. Or at least we think we do. 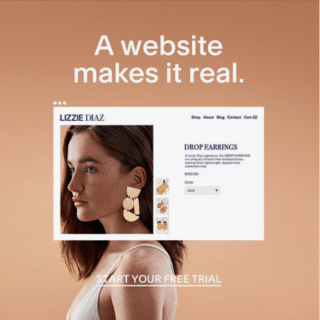 And yet, with five simple words—A website makes it real—Squarespace makes the familiar feel fresh. This campaign illuminates a powerful truth about websites, one sure to get neurons firing in the minds of its target audience of upstarts, creative types, and entrepreneurs. Suddenly, websites aren’t just pretty combinations of words, pictures, and videos. Nor are they mere marketing tools for building your business or selling your stuff. According to Squarespace they do much, much more: they transform dreams into realities.

Because the truth is, everyone has ideas. But it takes something more to make those ideas a reality. And Squarespace is happy to step in to fill that role.

Let’s take a look at one more example, from the dating app Hinge. Hinge’s latest campaign, headed up by Red Antler, calls out an insight about dating apps that, once expressed, is forehead-smackingly obvious: If a dating app does its job, you no longer need that dating app.

Hence the line, The Dating App Designed to Be Deleted.

A therapist once told me that his aim was to be so helpful that he made himself unnecessary. Hinge does something similar here, illuminating a hidden truth about the product that smacks you right between the eyes, lights up a little connection in your brain, makes you smile, and endears you to the product.

Now, more than ever, properly practiced marketing communication is the furthest thing from overhyped claims and exaggerations. It’s about honestly introducing who you are, what you have to offer, and why it’s valuable. As we like to say at MarketSmiths, it’s humanized.

So by all means, develop a unique brand voice. Taut the benefits of your product or service with vivid images and compelling stories. Be humorous, self-deprecating, deadly serious—whatever suits you and your message.

But above all else, make sure you tell the truth. Need a hand doing that? Enlist the expertise of a copySmith today.

Your Brand Doesn’t Have to Be Political to Be Authentic