Seamless used location-specific humor to win over the hearts—and stomachs—of New Yorkers. Here’s everything they did right. 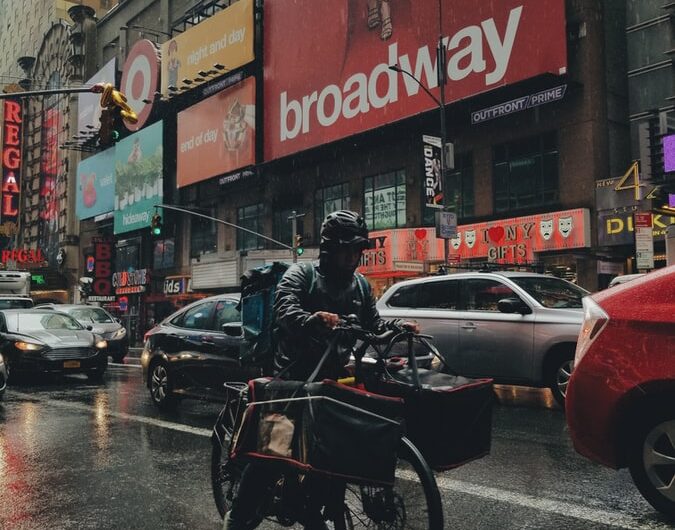 Being a New Yorker is like being part of an exclusive club. There’s a history, culture, personality, and experience that’s completely unique to New Yorkers—and they like being reminded of it.

Seamless found a way to grab the attention of a city of over 8 million people—who at any given moment have headphones in their ears, and eyes buried in their phones.

Yet by relatable content and strategically placed ads, Seamless made New Yorkers feel special. Finding a Seamless ad during your morning commute became as common as seeing a subway rat scurry across the tracks—and that’s how Seamless ad campaigns became ingrained in the city’s culture. Here’s how they did it.

Getting Into the New York State of Mind

Seamless—part of GrubHub—aimed to position itself out in the real world—throughout the city it serves. This was no easy task—the millions of people these ads were targeting walk much faster than the average American and don’t have time to waste, or at least that’s what they want you to think.

A 2020 study by Arbitron reported that over 89% of U.S. adults are exposed to out-of-home advertising every single day. Digital ads have the ability to reach millions of people, in other words, and in a city as busy as New York, the same can be said for in-person ads.

However, Seamless understands what their targeted audience’s daily life looks like—and how to infiltrate it. New Yorkers sit down on the subway and immediately stick their noses in a book, newspaper, or phone—or they look around, avoiding eyes but examining ads. Seamless targeted these individuals by plastering ads all over subway cars, always complete with colorful imagery and clean text.

The content of Seamless ad campaigns are relatable and funny—commuters can actually look forward to getting a “Seamless subway car.” Witty phrases like “you made rent, celebrate by not making dinner” and “wait for a table? You won’t even wait for a walk sign,” are sure to get at least a smirk, and maybe even a chuckle, out of the average subway rider.

Ads are also located on the walls of subways stations, giving people ample time to examine an ad while they wait for the train—which, let’s face it, will probably be late.

The Rule of C’s: Clean, Cute, and Comedic

Seamless ad campaigns are set up to be repeated time and time again. Ad designers came up with a routine: write a witty tagline, accompany it with a cute illustration that encapsulates New York culture, stick the ad in a location with the highest volume of foot traffic, and watch as business booms.

With clever content like “Avoid cooking like you avoid Times Square,” and “The L Train may shut down, we won’t,” New Yorkers are made to feel like they’re being heard. Anyone can make sense of these ads, but there’s a feeling of belonging that comes with really being “in on the joke” and Seamless ran with this feeling.

At the same time, Seamless has expanded on this theme by creating a campaign playing on specific food trends for different New York neighborhoods.

Murray Hill won for “most potassium rich neighborhood” based on how often people ordered bananas. The ad is complete with an illustration of a man excitedly holding up two bunches of bananas.

Another ad awarded the Upper West Side with “the neighborhood with the biggest identity crisis” based on the number of Chicago-style pizzas ordered. The ad is accompanied by an illustration of a gooey Chicago-style pepperoni pizza.

Seamless created a formula for eye-catching, personalized ads that they can tweak when necessary. This formula has allows Seamless ad campaigns that New Yorkers not only expect to see, but look forward to seeing.

Alongside ripe competition in the storied Willamette Valley, Flaneur Winery wanted to stand out. So Russell Litchenthall, Director of Hospitality & Sales, reached out to an old friend at MarketSmiths. We were able to learn and tell the business’ unique backstory, explaining the origins, philosophy, unusual name—an historic grain elevator, a major visitors’ attraction. The published copy is as beautiful as the images, making Flaneur the toast of the town in a crowded field.

Making a Virtual and Real-Life Impact

Apart from providing a quick, efficient food delivery service to millions of hungry citizens, Seamless focuses on becoming part of the community itself. The company has worked hard at accomplishing this—and it has, making itself almost synonymous with New York.

Aside from creating a brand that’s recognizable in the real world, it also has a strong social media presence with interactive posts that promote audience engagement and further brand loyalty.

Take a look at their Instagram (warning: it will make you hungry), and you’ll see photograph after photograph of juicy burgers, colorful sweets, and melted cheese—a good cheese-pull cannot go unnoticed.

The pictures draw you in, but the captions keep you around. Sometimes they ask a question, other times they’re funny, and most of the time they include some kind of giveaway. One photo of a gooey mac and cheese chicken wrap is captioned with details about a giveaway to win a $50 Seamless giftcard. All the audience has to do is follow Seamless on Instagram and tag a friend. Another photo of a slice of Sicilian pizza covered in tiny pepperoni cups—all collecting grease—asks the audience this critical question: “Cripsy roni cups, yes or no?” This encourages people to interact with the posts and invite their friends to do so, too.

Their Twitter account contains similar content: food related polls, giveaways, promotions, humorous tweets. Just like they show up almost every time you step into a subway car, they’re present every time you refresh your feed!

In the midst of the pandemic, meanwhile, Seamless introduced an initiative to help with COVID-19 relief efforts in the city. By encouraging customers to donate their change to the Seamless Community Relief Fund, which donates money to local restaurants and delivery drivers who are impacted by the pandemic, they’re genuinely helping out the neighbors.

This commitment to the community, both in person and online, is an intrinsic feature of Seamless ad campaigns—and one the competition has struggled with. Sure, you can order from UberEats or Door Dash for about the same amount of money, and with similar food options, but do those companies really understand you? Well, Seamless does, and they’re going to remind you every chance they get.

New York City is eccentric, special, and in a league of its own—and so are Seamless ad campaigns. The food service industry is extremely competitive, but Seamless stepped up to the plate and solidified itself as the city’s go-to when you need a bacon, egg, and cheese sandwich or a slice of the best pizza in the world. Seamless built a brand based off of the average life of a New Yorker, and in the process became part of the average life of a New Yorker.

Want clean copy that satisfies your copywriting needs? Contact us for copy that delivers every time.

What a MarketSmiths Video Script Can Do for Your Branding