More Than a Club: What FC Barcelona Can Teach Sports Marketers About Fan Engagement

How has famed soccer club FC Barcelona kept fans engaged for decades? With interactive initiatives, a chance to have a voice in decisions, and the club's commitment to social justice. 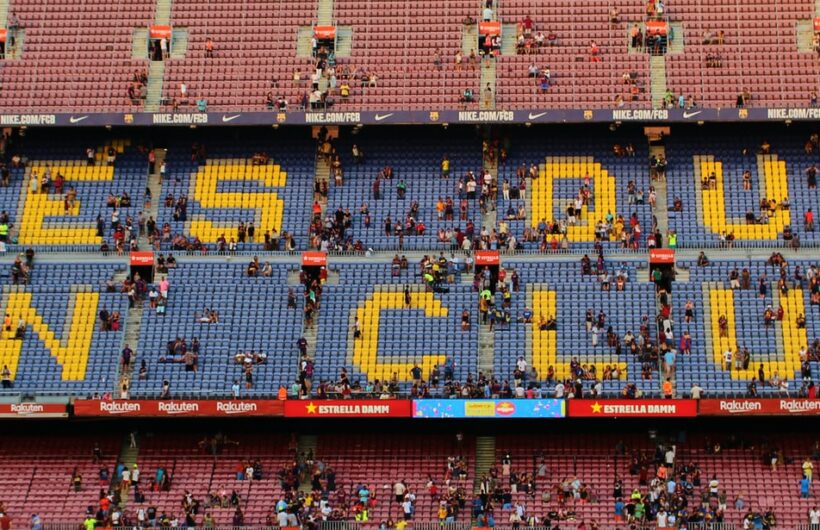 In this guest post, Harrison Whitaker explores the business secrets of footballing giant FC Barcelona—and what other sports marketers can learn too.

If you want to know what famed Catalan soccer club FC Barcelona stands for, all you need to do is take a look inside their stadium. Strikingly painted across dozens of rows is the firm’s motto: “Més Que Un Club,” or “More Than A Club.” While it’s easy to assume that FC Barcelona’s incomparable global popularity comes from its triumphs on the field, a close examination of the club’s ethos shows that it takes more than a winning record to develop a fan base so dedicated.

No success story is simple. FC Barcelona landed where it is today through generations of cultivating fan respect. But the club is under no illusions—the relationship between a team and its fans needs constant attention and upkeep in order to thrive. Every business, brand, and organization wants to develop deep, meaningful relationships with its audience, but connections like this don’t just happen overnight. Barcelona continues to go the extra mile when it comes to its supporters, and other organizations could learn a thing or two from its methods.

Part of FC Barcelona’s success in inspiring a modern audience comes from its ability to leverage a history of being a fans-first club. A few decades after its founding, the fiercely Catalan club came to blows with Spain’s fascist dictator Francisco Franco. As Franco sought to bring more and more power to the Spanish capital, the independence-minded Catalonia became a thorn in his side, and no organization better represented the city than their soccer club. This struggle lead to the murder of the firm’s president Josep Sunyol and a feud with Franco’s favorite team, Real Madrid. In the grueling years that followed, the people of Catalonia looked to FC Barcelona as a symbol of hope and resistance against a tyrannical government.

Though the Franco regime ended decades ago, FC Barcelona and its fans never left behind the club’s populist origins. The rivalry between FC Barcelona and the Franco-backed Real Madrid remains a fierce one to this day: Barcelona fans still sing a chant describing Real Madrid as “the team of the government and the embarrassment of Spain.” Leaders in all industries, especially sports marketers should take note: not only do you have to fight for your customers from day one — you need to develop customer relationships so strong that the memories of what you’ve done never fade.

In today’s world, customers are looking to be fully invested in a business: they want to agree with what it does, how it does it, and who benefits. The greater the voice that customers have in a company, the deeper the relationships formed will be. Some businesses achieve this through IPOs, some through crowdfunding — there’s no wrong way to give your customers the ownership they want.

FC Barcelona’s aren’t just bystanders: the club is one of the only of its size to be owned entirely by its fans. Dedicated supporters can buy memberships to the club in order to become soci, or part owners, of which there are more than 140,000 today. The club is also famous for its over 1000 penyes, international fans and financial backers of the club. Dedicated followers of the team earn the moniker of “Barça fans,” while more casual supporters are known as culés.

Whatever kind of Barcelona fan someone is, there’s a group for them to become a part of. Barça fans and culés alike have access to games, quizzes, drawings, discounts, and much more on the club’s website, ensuring that fans always feel like they’re a part of the action if they want to be. In the context of the COVID-19 pandemic, these tech-powered audience relationships are more important now than ever before; FC Barcelona is playing its games to empty stadiums, and supporters need a way to stay engaged if the club doesn’t want to hemorrhage large parts of its fanbase.

At Madison Square Garden (MSG), VIP guests can pre-order food and cocktails before Knicks and Raiders games. But with uninspiring copy, it was time to drag MSG to a new era. That’s where MarketSmiths came in. We were hired to write 200 new food and drink descriptions for MSG—a task we took on with relish. Combining simplicity and elegance, we made each and every option deliciously enticing, finishing the whole task with practically no revisions. Even better, MSG soon noticed a huge increase in orders—boosting the arena financially even as punters left happy and full.

Barcelona’s respect for its fans has played an invaluable role in making it one of the world’s greatest soccer teams. Their tactics, however, aren’t just reserved for top-flight athletic clubs; sports marketers (and businesses) of all shapes and sizes can learn from what FC Barcelona has done.

In recent years, the club has taken an outspoken stance against homophobia by launching a star-studded video campaign and donating just shy of 1% of its annual revenue to the Barça Foundation, a charity dedicated to boosting social development in young people. Lots of brands say they care about the people they serve—and it’s often mere lip service. In Barcelona’s case, fans are presented with concrete evidence all the time that they are indeed the firm’s priority.

Standing up for fans doesn’t just have to mean tackling social issues. FC Barcelona has also invested heavily in engaging a new generation of fans through a well-curated social media presence and interactive digital experiences that invite fans to predict how their favorite players will do. Audiences are looking for tangible instances of meaningful outreach more than anything else, and a business doesn’t have to be a world-famous soccer club to provide those.

Barcelona has a legacy of bringing their fans as close to the action of the club as possible, but a legacy like that works both ways. Fans expect a lot of the club, and the club delivers in return. If other sports marketers want to achieve a similar reputation of going the extra mile for its consumers, it needs to do so through its action as much as through its words.

Need copy that scores hat-tricks for fun and never scrapes through in extra time? The maestros at MarketSmiths are here to dribble past the opposition and help you win in style.

AIDA: The Secret Formula Behind Almost Every Ad You’ve Ever Seen