Although classical music has the power to make listeners feel calm and relaxed, it can sometimes be difficult to attract modern audiences. So how has the BBC Proms—the world’s biggest music festival—managed to engage audiences for years? 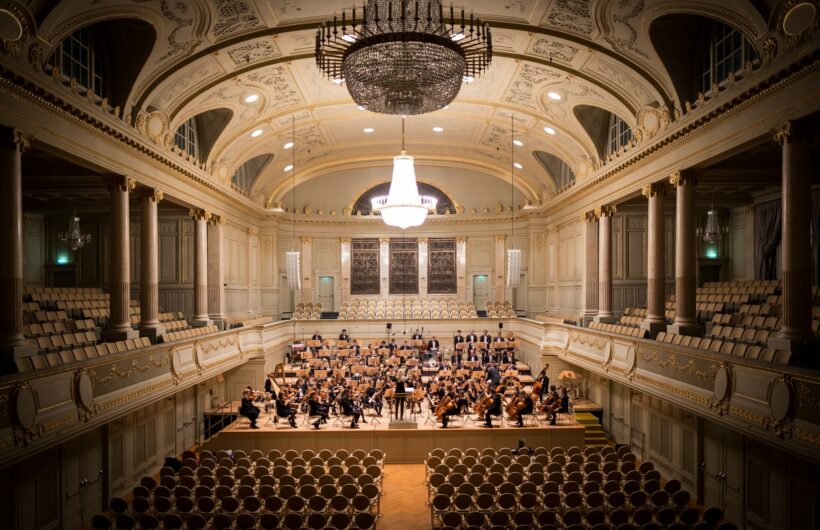 What’s the world’s biggest music festival? If you’ve been to Glastonbury or Lollapalooza, you probably think you know the answer—and you’d be wrong. And you’d be just as wrong if you picked Coachella, Austin City Limits,  Summerfest, or any of the dozens of parties where thousands of spaced-out kids squat in muddy fields for a week and huddle in leaky tents (I write this from experience). No, the biggest, and oldest, music festival on earth is the BBC Proms, and there isn’t a bucket hat in sight.

Founded in 1895, and lasting eight weeks each summer, the Proms have bewitched generations of Prommers (as they’re known) with some of the most stunning classical music ever composed. Mixing old favorites with up-and-coming performers, the Proms draw in audiences of thousands, with lines regularly snaking around the Royal Albert Hall in rain or shine.

But how have the Proms managed it, especially in a world where classical music seems to always be going out of fashion? In a word: innovation. That might sound surprising in the stuffy world of classical music. Yet by blending ancient and modern, old and young—all under an umbrella of beautiful, engaging copy—they’ve thrived for over a century.

And all that jazz…

Billed as the greatest music festival on earth, the BBC Proms offers enthusiasts a score of classical music. This year’s festival, due to happen in July and August, is no different. But that doesn’t mean they’re sticking to the same old tune. Aware that it’s more difficult to attract modern audiences by just talking of harpsichords and violin concerts, the Proms have recently spread their wings—and expanded their fan base in the process.

Meanwhile, this less stuffy attitude is coupled with copy that sings.

One playlist, for example, promises an “imaginative, eclectic mix expertly curated by the In Tune team” while another offers “musical delights for you to focus and relax to.”

This elegant, straightforward tone is echoed elsewhere on the Prom’s website too. Conscious that some new visitors may not know their Bach from their Brahms, the BBC offers accessible guides—for example, on the intricacies of Beethoven’s joyous 7th Symphony or musical journeys for children.

It goes without saying that these tactics offer many lessons for marketers—and not just if your brand boasts cellos and violas. By hoisting the banner of accessibility, your team can easily entice new fans with unpretentious and welcoming copy.

One of the sexiest hotel firms around, Wyndham Hotel Group (WHG) was making major moves, from performing a detailed brand survey to acquiring another hotel brand. But to really succeed, these projects needed sparkling copy. Not easy any time, especially given WHG’s tight deadlines and vigorous fact-checking. But after tapping MarketSmiths, we took all this in our stride, polishing off page after page of copy ahead of schedule—and rich with detail to boot. Even better, we delivered timely insights into WHG’s mobile landscape, equipping their team with crucial background to reinvent their UX/UI. No wonder the group’s since gone on to even more remarkable things, cementing its place as one of the best hospitality firms around.

Of course, that’s not to say that the Proms don’t stay loyal to their more established audience. By promoting classic events like the Last Night of the Proms—imagine retired colonels waving the Union Jack and singing patriotic songs—the BBC is able to seduce new audiences while still keeping the old stalwarts.

And though it might aim much of its fire at beguiling totally new fans of classical music, it’s clear that the Proms are also nimble enough to adapt old favorites. Take, for instance, the Proms at Home—the festival’s attempt to stay relevant during a year of lockdown.

In the same welcoming tone that characterizes the rest of its website, the Proms promises “weekly activities for you and your family,” covering everything from uploading pictures of your musical den to creating lullabies with thousands of fellow fans.

Given so many parents have struggled to have their children at home, let alone entertained, this seems like a surefire way of keeping more established classical music lovers onboard—while also attracting new generations of fans.

Once again, the BBC is showing how comfortable it is mixing up traditional programming with more zeitgeisty material—and your brand should be, too. Being willing to shift tack when circumstances change is vital to growing your audience—and keeping it when things get tough.

In short, the Proms is the perfect combination of old and new, traditional and radical—with plenty of lessons for brands in music and beyond. So what are you waiting for? Put on your dancing shoes and get out there—just don’t expect to crowdsurf when you do.

Want copy that gets you on your feet, clapping for an encore? MarketSmiths can help.

The Genius of Nuggs: How Marketing Plant-Based Food as Fake Actually Worked