VR gaming platform Roblox is no longer a virtual space “just for kids.” Consider how their copywriting reflects an elevated mission—and what they can do to compete with the Metaverse.

How does a VR gaming company go from a virtual playground for kids to one of US News and World Report’s “7 Best Virtual Reality Stocks to Buy Now”?

Roblox’s journey is unexpected, but these days, they’re leveraging web copy to build investor confidence—while trying to avoid sacrificing their essential consumer base.

Look at the top banner on their “About Us” page: “Reimagining the way people come together.” Rhetoric like that is common among tech companies, but it might seem outsized for a company whose product is basically a digital version of Lego blocks married to an MMORPG. But below, they reinforce the sense of creativity that first captured fans’ attention: “We don’t make Roblox. You do.”

On the one hand, Roblox needs to present itself as a company that should be taken seriously by investors. On the other, Roblox is still a VR gaming platform dedicated to fun. While there’s tension between these two goals, expert copywriting can help bring audiences together to assure a forward-march toward an exciting future of endless possibilities.

The Roblox audience is… not so simple.

Consider any third grade classroom in America: kids are more apt to discuss what their avatars are wearing than what they themselves put on this morning. They’re counting down the hours until they escape to their “Adopt Me!” pets, “MeepCity” dream homes, and friend-generated realities.

Much like Minecraft and Lego, Roblox began with a simple concept: what if building blocks were virtual, and the interface intuitive enough for children to create their own customizable environments?

This 2015 ad gives you the basic gist of the VR gaming platform:

Here they speak to open-ended imagination and emphasize the individual. Compelling—but having a cult following of 9-year-olds poses a fundamental business problem; while 49.4 million children of playing age in the US alone is nothing to sneeze at, there’s also not much allowance money to go around—especially when your parents are concerned that you may be talking to strangers in chat, suffering at the hands of virtual bullies, or getting scammed out of your Robux. As with social media, all it takes is enough uproar to bring the whole realm crashing down for the under-18 demographic.

Roblox grows up into the VR gaming platform of choice

The new Robloxian image kicked off with  a logo upgrade—from colorful, graffiti-scrawled blocks, to a modern gray and white square—and continued in their copywriting.

Well above the dump trucks and killer robots of yesteryear, their blog pitches a visionary agenda:

At Roblox, we envision a future where anyone can create anything, anywhere. With 32 million experiences already on the platform and over 60 thousand new experiences published daily, the Creator group is well on its way to bringing this to life.

With tens of millions of daily active users, we are moving closer toward our mission of connecting a billion people with optimism and civility.

Far from “all fun and games”, Roblox seeks to “democratize creation”, building a new virtual economy where anyone can be a creator of digital goods, services, and experiences. As a VR gaming platform that “reimagines the way people come together to create, play, explore, learn, and connect with one another”—these are all worthy themes to explore as their content strategy matures.

Roblox copy supports their rise to mainstream prominence, alongside the Metaverse, with hard stats— including this statement on their meteoric impact on fashion:

In 2022 alone, more than 11.5 million creators designed over 62 million virtual clothing and accessory items on Roblox. These creators dress millions of people all over the world and impact how they express themselves both in the digital and physical worlds.

To put that in context, there are at least 200 times as many creators designing clothing and accessories on Roblox as the estimated number of fashion designers creating physical collections in the United States.

Roblox is a unique place where you can hunt dinosaurs, pick up pointers on your dance moves, shop the latest runway fashions, solve a murder mystery, and lead a double life in a cyberpunk dystopia. As they put it: “Roblox continues to be the most inviting place for novices to take their first steps as digital creators.”

It’s an enticing prospect for users, entrepreneurs, and investors alike—but can it survive?

Whether Roblox maintains steam for their vision and aspirations over the long haul remains to be seen. Even the best copywriters can’t keep the lid on a kettle that’s overflowing with negative public-facing reviews. A cursory glance at the Roblox Facebook page reveals cracks in the facade.

Roblox paints a flowery picture with their prose on October 4, 2022:

Some days, a little natural splendor—and gorgeous fantasy architecture—are all the Sanctuary you need. On days like that, a trip through the strange spires and immersive, overgrown foliage of the druid’s sanctuary will offer a peaceful, beautiful, and tantalizing respite. You might forget you’re on Roblox… or on our world at all.

But a user named Angelica comments that a stranger scammed her and hacked her account. Another user named Amanda claims the platform is “toxic” and that “people bully all the time there.” A third user named Natalia accuses Roblox of being a “shameful company” with “abusive practices allowing very young children to make unauthorized purchases.”

Along with an IPO comes much responsibility. It will be up to Roblox to operate ethically, first and foremost. Then they must produce a steady stream of content reinforcing their commitment to safety and society.

Currently, their blog has a (somewhat neglected) category titled, “Digital Well-Being.” They use this section to implore parents:

Instead of blowing the dust off the board games, why not give your kids the option of picking what games you play together this holiday, even if it is an experience online? For example, on Roblox, you can join your kids in the same game at the same time, and share that experience together. It is a great way to bond with your kids and helps build trust and understanding so that you can approach conversations about their safety online more openly.

A step up, the corporate site’s parents portal mentions strides Roblox takes against misuse of their platform, such as: a reporting system for chat abuse, chat filters, customizable parental controls, automatic clothing detection, and a dedicated trust and safety advisory board.

It’s a start, but Roblox can’t afford to put the blinders on in its ascent to the top. Aspiring creators and changemakers have been well-addressed by current copy—but in order to grow sustainably, they must take care to make their user base feel seen, heard, and supported.

Without them, what remains? Instead of “powering imagination,” Roblox will empower the dark side of possibility—descending into a VR gaming den of thieves, charlatans, bullies, and creeps—and who wants to live in a world like that?

Future-proof your business: Capture the audience, the voice, and the story you need to tell with MarketSmiths. We help create the world your company lives in. 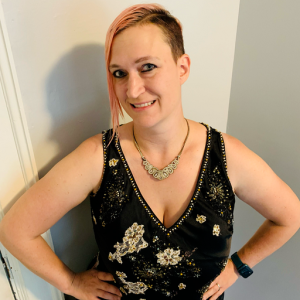 Jennn made up her mind to become a writer when she was five years old and has buried herself in research and the written word ever since. She grew up a snowboarding, guitar-playing, concert-going punk-rocker in Buffalo, NY, home of the chicken wing. After earning a BA in Journalism and English from SUNY Geneseo, she spent most of her twenties working as a music journalist and a promotions marketing manager in Toronto. Her freelance writing career spans nearly two decades of crafting copy for lawyers, doctors, realtors, digital marketers, tech startups, and consultants. When she's not on her laptop with 100 tabs open, she's hanging out with her German Shepherds, husband, and two children; dressing up at theme parties; excelling at Cards Against Humanity and Puns of Anarchy; cruising the ocean; or venturing into the woods to live like Thoreau.

The Industry Dish: How to Avoid Fashion Copy Faux Pas